You are here: Home / Coping with Death / Dependents

The Courts can change the provisions of a valid will to make provision for your dependents despite your wishes.

In 2015 the High Court agreed that the illegitimate son of a man who died leaving a £2 million fortune should receive some contribution from the estate towards his musical education, despite the Will clearly excluding him as a beneficiary.

Miles Taylor was 17 when his father died. Peter Gardiner left a bequest of £350,000 to charity with the remainder of his estate in trust, specifically excluding Taylor.  However, as a dependent Taylor sought ‘reasonable provision’ for his maintenance and education fees from the estate.

In addition to £110,000 already paid out as reasonable provision by the trust, the judge held that it was reasonable for the estate to contribute £15,000 in further fees if Taylor is now accepted onto a prestigious postgraduate music course.

Although Gardiner left instructions in his Will and made clear his wish to disinherit his child, the law reserves the right to make reasonable provision for dependents and can therefore go against the testator’s wishes to this extent. It is wise to bear this in mind when seeking to disinherit. 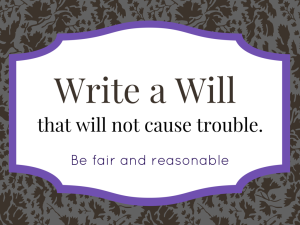 Daisy Goodwin has written emotionally of the damage that can be wrought by the exclusion of an adult child from a Will, however justified. Having seen her mother’s estate shared between her siblings, Goodwin presumes that her mother felt she was in less need than they. Yet Goodwin warns that the emotional impact of favouring one child over another in a Will cannot be underestimated.

Making a Will is a good start. But consider carefully before making unequal, or inadequate, provision, and in Goodwin’s words, imagine your children “not as the mature adults they now are, but as the toddlers they once were.”

Report in Daily Mail on this variation in a Will