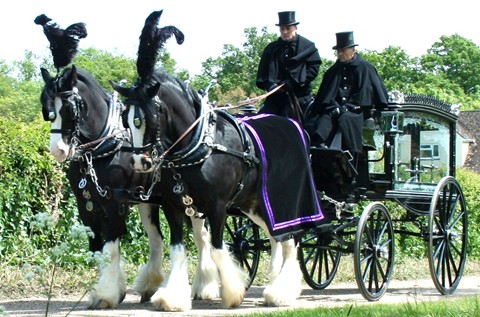 The Victorians certainly knew how to stage a grand funeral.

The hearse would be a beautiful horse-drawn carriage with glass sides and gilt decoration, and horses and carriage alike would be adorned with black ostrich plumes. Severity would have been the order of the day, proper mourning dress and behaviour expected of all.

Funeral grandeur was heightened following the death of Prince Albert in 1861, as more elaborate funeral processions, carriage and memorials became an aspiration of even the lower classes. The greater the show, the wealthier the family of the deceased: horses decorated with six or more black plumes would turn heads as they passed, more for the luxury than beauty.

But as the century turned and world war threatened people gradually felt that there might be more sense in paying attention to the living than the dead. Motorised hearses took over from sedate horses and families turned to less flamboyant displays of affection for their dead.

Yet the glamour and gravity of Victorian funeral ritual remains. Formal horse-drawn hearses are a proud sight and can still be used today, and whilst the strict rituals of family mourning may have relaxed, many feel bound to respect the dead by wearing black and covering their heads.

The Victorians were responsible for the development of the Funeral Director and the birth of grand cemeteries, along with many funeral rites that linger today. Their memorials are amongst the most romantic, and I will be taking a look at these in a later post.