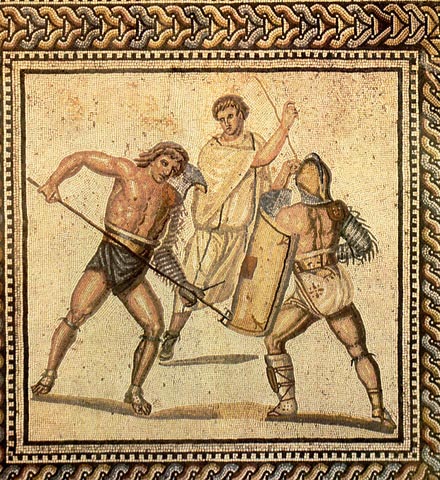 You are here: Home / Funerals / The Roman Funeral

Did you know that Gladiatorial fights originated in Roman funeral customs?

Listening to Radio 4’s discussion on “In Our Time” about Spartacus I became intrigued by the connection. It seems that Romans believed that human sacrifice at a funeral would appease various pagan gods and ease the dead person’s entry into the afterlife.

The first recorded gladiatorial fight appears to have been staged in 264 AD. On the death of prominent aristocrat D. Junius Brutus Pera, his son selected three pairs of slaves from among prisoners of war to fight at his father’s funeral in honour of his memory. It is believed the fight would have drawn a great crowd and brought prestige to the family name. Roman funeral ceremonies lasted as long as nine days, at the end of which the sacrifice was made. As the tradition evolved, slaves or prisoners were bought, trained to kill and then sacrificed during the funeral rites in a ceremony known as “munus”. A munus was a duty paid to a dead ancestor by his descendants, intended to keep his memory alive.

Slaves would attend the munus dressed as the Roman god of the dead, Charon (who ferried the dead across the River Styx) and symbolically carry away the dead bodies of the gladiators. As support for the idea of gladiatorial combat grew, representations of Charon continued to be involved even in the largest arena.

“one hundred and twenty gladiators fought and funeral games were given for three days, and after the games a banquet”

whilst the games organised by Julius Caeser on the death of his daughter Julia featured 320 Gladiatorial matches.

Prominent Roman families competed to offer the best spectacle and Gladiator Games became political events laid on to garner support whilst seeking the protection of the gods for Rome. Huge stone amphitheatres  were built to replace the early wooden arenas venues, most famous of which is the Colosseum built in 29 BC, and Gladiator schools evolved, providing expert training in weapons and combat techniques. Meanwhile the rich were able to invest in troupes of Gladiators and bet on the outcome of matches.

And where does Spartacus fit into all this? He is perhaps the most famous Gladiator, a man taken as prisoner of war, sold as a slave and then selected for training as a Gladiator at one of the schools that had grown up for this purpose. Whilst there he led a revolt, fleeing with his supporters and many slaves up Mount Vesuvius

He eventually died in battle at the hands of Crassus, who crucified some 6,000 of those who had fought alongside Spartacus. Bronnikov’s depiction of the crucifixion on the road to Rome

More on Gladiator history from Tribunes and Triumphs