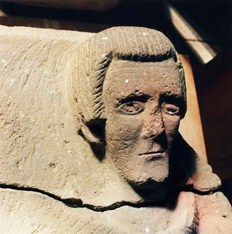 Thefts from country churches have long been a problem, but this year a gang is believed to have stolen memorials and effigies ‘to order’.

In six months from March 2012 at least half a dozen medieval monuments were taken, most recently a 15 inch tall stone plaque marking the spot where the heart of a past Bishop of Hereford was interred.  Other churches in Herefordshire have seen the loss of stone carvings from graves, including a carving of a 13th Century Madonna and child.

Police believe that a single gang is responsible and the artefacts are being sold abroad.