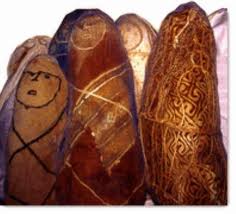 Secrets of the Cloud People

You are here: Home / After death / Secrets of the Cloud People

When the Chachapoya were all but wiped out by Incas before the Spanish invasion of present-day Peru, they could not have known that their burial practices would be one of the most enduring clues to their civilisation.

These ‘people of the clouds’ lived high in the Andean mountains from about AD 800 to 1500, but little is known about their culture.

In 1996 a cache of some 200 mummies was discovered in cave-like niches in a cliff by grave-robbers. They tore open many of the remains to loot jewelry and other artifacts, and when local officials tried to save what was left they inadvertently destroyed crucial archaeological evidence.

Yet recent research has shown that the bodies were treated with great care by their society, carefully embalmed and wrapped in a foetal position, with hands securely tied to the head, then placed in a cloth sack upon which the symbol of a face was sewn.

It is believed that families involved their dead relatives in festivals and rituals, removing them in their bundles for big events.