The reburial of the disinterred remains of King Richard III took place in Leicester Cathedral after an unseemly squabble between Leicester and York over where he should be laid to rest.

The bones have now been sealed in a lead-lined coffin built from oak and yew by a descendant, and buried under a stone tomb in the cathedral.

The desire to see this last Planteganet King buried with “dignity and honour” speaks volumes about our respect for the dead: even those who are widely believed to have committed murder.

King Richard III reigned for barely two years, having succeeded following the death of his brother and after his brother’s sons (in his care) were first declared illegitimate and then believed murdered on his orders.

Perhaps this desire to treat his remains with dignity recognises the ignominy of his death, especially after recent explorations discovered his body had been abused after leaving the battlefield.

Perhaps it simply derives from a feeling that he should always have had a burial befitting a King, particularly one who died in battle on home soil. An historian connected with the archaeological dig even commissioned a traditional burial crown for the king, gilded and studded with rubies and sapphires representing the livery colours of the House of York. 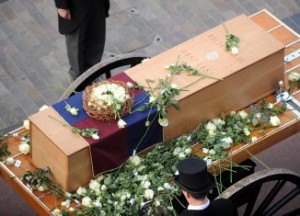 Whatever the reason, it is clear we share an atavistic desire to treat the dead with respect. King Richard III is lucky belatedly to receive such honour, yet we understand that a simple ceremony without all the publicity and trappings is enough to satisfy the desire for “dignity and honour” for even the most humble person.

Let us hope that the publicity surrounding the burial, including the involvement of actor Benedict Cumberbatch, is not in fact targeted at a flagging tourist market.

BBC reporting on the burial