An exhibition at The British Museum in 2014 revealed intimate details of mummified bodies undisturbed for up to 5,000 years.

“Ancient Lives, New Discoveries” explored how modern technology can help uncover details of the past. Despite having moved ancient mummies from often-sacred burial places, museums have been reluctant further to disturb the bodies.

Yet modern medical imaging techniques permit a non-invasive exploration of what lies beneath the preservative wrappings. The Museum has made use of equipment at London hospitals to delve right to the bones of selected mummies, revealing that they had tooth abscesses, cardiovascular disease and even tattoos. 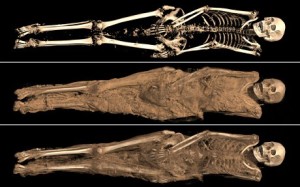 Scan from The British Museum

“What we are doing in the exhibition is investigating the lives of eight people from the past,” said John Taylor, head curator in the Ancient Egypt and Sudan department at the museum

“We want to promote the idea these are not objects but real human beings. We want to capture the humanity of these people.”

Yet in doing so, they are arguably invading these people’s most private space. Can it be said that the interests of research should in such cases override the presumed wishes of the deceased?

Report in The Telegraph