You are here: Home / Law / Burial of Ashes

When Tom Sharpe’s partner invited a TV crew to film her burying his ashes, along with his favourite whisky, cigar and pen in a Northumberland churchyard, she figuratively put the nail in her own coffin too. 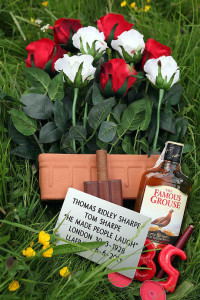 For Dr Verdaguer had no permission from the church authorities, who have now obtained a judgment from the Church of England’s consistory court based on trespass to church property and disrepect of those lawfully interred.

Dr. Verdaguer must pay the £1,320 costs of the court hearing before she can recover the items, which were buried to be with Sharpe’s father, a minister also buried at the church.

The destiny of ashes can be a difficult issue, since people rarely consider the laws of trespass when identifying where they wish their mortal remains to end. Simply put, if you want to place ashes in a churchyard you should of course ask permission and comply with the rules. Elsewhere, too, one should responsibly ask the owner of the land, though this civility may be noted more in breach than observance.

Either way, public filming of the event may turn out to be the last thing you need.

See The Telegraph report on this case, including photo credit.

Reflections
Next Post: Is there a Right to Die?