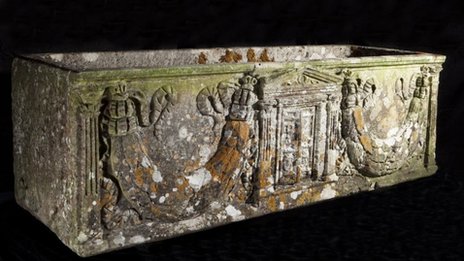 You are here: Home / Memorials / New Uses for Old Things

Who would have thought that an ancient stone coffin would join the current trend for up-cycling?

The 2,000 year old Roman sarcophagus was apparently imported by Queen Victoria’s surveyor of pictures, Sir John Robinson, and found use as a garden trough after it was bought at auction 100 years ago.

The family were unaware that the seven foot trough is a finely carved white marble sarcophagus, which fetched £96,000 at auction earlier this year.

Meanwhile digital barcodes have come some way since they were first introduced in the 1970’s for supermarket checkouts.

Unique barcodes attached to funeral invitations can link to a dedicated internet page sharing no end of information about the deceased: and now this service is available for gravestones. Simply attach a barcode to the memorial, and pictures, biographical information and even sound clips can be downloaded via many mobile phones.

The first to make use of this technology in the UK was Tim Tuttiett, who died last November and was buried in Lytchett Matravers, Dorset. QR-Memories provided a QR code to be attached discreetly to the memorial, which can now be scanned by anyone interested in finding out more about him.

How good to know that even in the world of death, innovation is alive.