“There is no reason why cemeteries should be places of gloom”

In 1917 Sir Frederick Kenyon, Director of the British Museum, was asked to chair the Committee of the newly-formed Commonwealth War Graves Commission. It was no longer considered appropriate that the bodies of those who gave their lives in war should lie in a corner of a forgotten field. 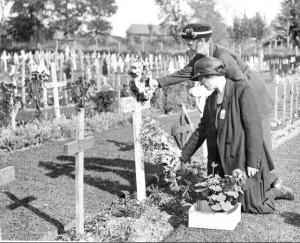 Following from the work of Fabian Ware, the Commission agreed that all the dead should be commemorated equally and with the same headstones, and that these should be erected near to where they died.  Artists were commissioned to design appropriate memorial stones and the layouts for the many cemeteries that would be created. A team of experts was invited to advise, including:

Architect Edward Lutyens designed the headstones, each 2 ft 6in high, to stand in ordered ranks, as of a battalion on parade, whilst fellow architect MacDonald Gill was commissioned to select a suitable font;

Garden designer Gertrude Jekyll advised on the planting, and the most successful of the three experimental cemeteries built in 1921 placed ordered rows of headstones in a garden setting; and

Rudyard Kipling was asked as Literary Adviser to come up with appropriate inscriptions that would not offend any religion: he recommended that the words “Their name liveth evermore” from Ecclesiasticus be featured on a stone of remembrance overlooking the graves, and chose the phrase “A Soldier of the Great War Known Unto God” for the grave of the unknown soldier (engraved on many of the graves).

Today the Commission continues in its pledge to commemorate the dead of two world wars in 153 countries. Every grave that crumbles is re-made, on a rolling programme that ensures each is ready for the centenary of the relevant battle.

Those who visit these cemeteries, especially in this anniversary year, will appreciate the quiet calm and beauty achieved by the Commission, whilst the formal arrangement of the gravestones has a stunning impact, allowing the beholder through half-closed eyes to imagine each is a soldier, ready for his orders.