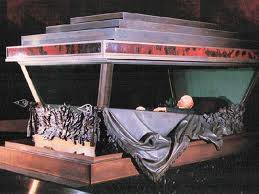 Ignoring the Wishes of the Dead

You are here: Home / After death / Ignoring the Wishes of the Dead

Despite his request to be buried quietly next to his mother in St. Petersburg, Vladimir Lenin was mummified after his death and put on display in a mausoleum in Red Square, at the centre of Moscow.

However, following leaks and now further problems with the building, a white dome has been erected over the tomb and there is talk of finally burying Lenin, who has been on display to tourists next to the Kremlin since his death in 1924.

This has become a political issue, some arguing that burying Lenin physically would symbolise Russia’s escape from his legacy, much as Stalin was removed from the same mausoleum during de-Stalinisation in 1961.

Recent polls suggest that more Russians now support this idea, though the final decision is likely to rest with Vladimir Putin.

Secrets of the Cloud People
Next Post: Living with the Dead »