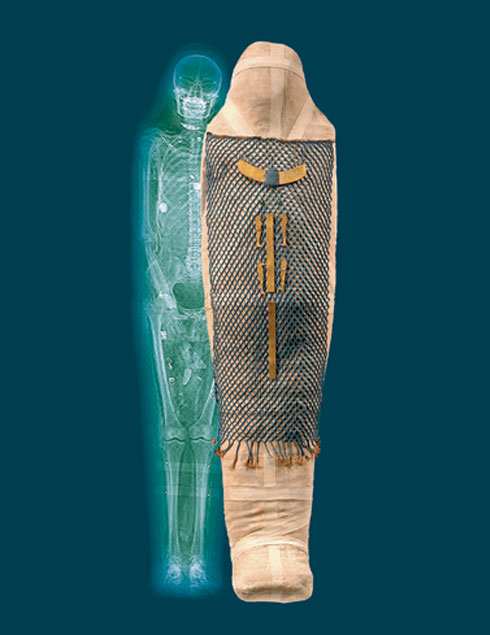 Many people living 2,000 years ago had clear wishes for their death. Ancient Egyptians believed firmly in the afterlife and took great care to preserve their bodies in preparation for this new phase of life.

A new exhibition in Scotland invites us to explore Life, Death and the Afterlife through artefacts from Ancient Egypt. “Fascinating Mummies” shows how modern scientists may take advantage of the preservation techniques perfected so long ago, using both CT scanners and genetics to bring these people alive in our minds.

Using the names of the dead and information uncovered by scans and DNA investigations the exhibition is able to show us much more about who these mummies are, and something of the lives they led.

Image from the Exhibition

In the case of one well-preserved mummy, still completely wrapped and therefore uncontaminated, forensic anthropologists have nevertheless been able to define the ethnicity, age and sex of this 25-30 year old woman.

Scans have also discovered what they believe is a scroll buried in the woman’s right hand, and hope that using micro CT sans they will be able to virtually unroll the papyrus and ‘read’ its message.

Would the Egyptians have believed that so much would indeed ‘live on’ so many years later? And does this affect your view as to what you would like to happen to your body after your death?

The exhibition will be at the National Museum of Scotland until 27 May, details here, and for an interesting interview on Radio 4’s Woman’s Hour with those involved in the exhibition and related research, click here.