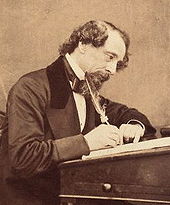 You are here: Home / After death / Dickens’ Wishes

How far were Charles Dickens’ wishes carried out upon his death? Were we respectful of another’s wishes 200 years ago? Detail from a photographic portrait (1858)

Dickens made his wishes perfectly clear, stating categorically in his will that he wanted no publicity or memorial whatsoever upon his death:

“I emphatically direct that I be buried in an inexpensive, unostentatious, and strictly private manner, that no public announcement be made of the time or place of my burial, that at the utmost not more than three plain mourning coaches be employed, and that those who attend my funeral wear no scarf, cloak, black bow, long hatband, or other such revolting absurdity. I direct that my name be inscribed in plain English letters on my tomb without the addition of ‘Mr’ or ‘Esquire.’ I conjure my friends on no account to make me the subject of any monument, memorial, or testimonial whatever. I rest my claims to the remembrance of my country upon my published works, and to the remembrance of my friends upon their experience of me.”

His loved ones carried out his wishes at the time, achieving a burial in private and with few mourners, though since he had not chosen a burial place an appropriate spot was found in Poets’ Corner at Westminster Abbey.

A popular desire to commemorate the bicentennial of his birth two years ago seemed to thwart to his contemporary wishes. In a celebration of his life marked by royalty, famous actors and numerous descendants, even the Archbishop of Canterbury spoke warmly of Dickens’ accomplishments in February 2012.

This week Dickens’ Great-Great Grandsons attended the unveiling of the first British statue to the great author, in direct contravention of his wishes. They argue that Dickens couldn’t possibly have known how very famous he would become, that his works would stand the test of time and since he even sat for sculptors during his lifetime he cannot have had any real objection to a statue in his honour. The 5 ft statue is by sculptor Martin Jennings and has been erected in Portsmouth within a mile of Dickens’ birthplace.

Few today can expect an ostentatious burial, though fewer still might consider formal funeral attire a “revolting absurdity”. Yet in truth Dickens’ wishes have in some ways been respected: his memory long after his death in 1812 rests indeed upon the enduring quality of his published works and his friends’ experience of him.

For the full contemporary text of the Will see Text of Charles Dickens’ Will  transcribed from The Times archives.