It was announced in 2014 that skeletons uncovered during ground works for London’s Crossrail project were victims of the Black Death.

Thousands of Londoners were killed when the plague chased across Britain in 1348-50, wiping out some 60% of the population. It was known that many were buried in mass graves outside the City walls, but until now the location was unknown. 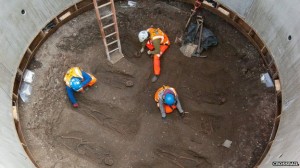 25 skeletons were unearthed during construction work a year ago, and following DNA and other testing it is now believed that they were plague victims cast to the edge of a mass burial ground beneath Charterhouse Square. Mr Carver believes that further excavations later this year will uncover thousands of bodies.

“This discovery is a hugely important step forward in documenting and understanding Europe’s most devastating pandemic,” he said.

The skeletons have also revealed a wealth of information about the lives of the people at that time. Analysis of the bones in particular has shown whether the person was London-born, breast-fed, at what stage his teeth decayed, the broad type of work he undertook and his age at death.

Osteologist Don Walker of the Museum of London confirms  “I’m amazed how much you can learn about a person who died more than 600 years ago.”