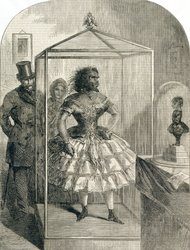 You are here: Home / After death / Burial Brings Rest

It may be 153 years too late, but a woman treated as a freak during her life, and mummified after her death so that her husband could continue to show her for entertainment, has finally been buried in her home town.

Julia Pastrama was born in 1834 covered in hair and with facial deformities, and subsequently certified by a doctor as a cross-bred human orang-utan. Bought from her family at the age of 20, she spent her life with a travelling entertainer, who eventually married her.

Pastrama died shortly after giving birth to their child, was mummified along with her child, and continued to feature in her husband’s displays. It was many years before a New York visual artist, Laura Barbata, began a campaign to have the body returned to Mexico.

This week Pastrama was given a proper burial in a white coffin, near her birthplace in Mexico, in what the New York Times reported as a “sweet though long overdue resolution”. Finally some respect has been shown to a woman who must have suffered during her lifetime and whose remains were offered little respect in death.

From the New York Times