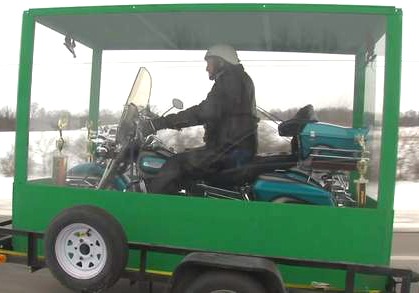 What’s a biker to do when he has two sons and one Harley Davidson?

Take it with him, of course.

18 years ago Bill Standley decided that when the time came, he would not choose which son should inherit the 1967 Harley-Davidson on which he had travelled America. So after he died in Ohio last month, he was buried dressed in full leathers and propped atop the motorbike in accordance with his wishes. 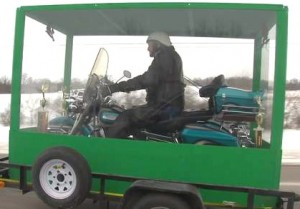 Standley’s sons helped him build the plexiglass box which would hold body and bike, and Standley bought the three plots next to his wife’s grave to allow room for the unusually large burial.

Historically, of course, bodies were frequently buried with treasured goods, in the hope they would be useful in the afterlife. But experience shows that many such tombs were looted, either at the time or over the years. One wonders whether the publicity surrounding Standley’s flamboyant gesture will similarly thwart his intent.