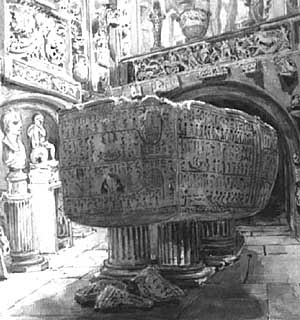 You are here: Home / Memorials / Art and Death

You would not expect to find an ancient alabaster sarcophagus in a house in Lincoln’s Inn Fields, but a visit to No. 13 reveals a crypt, funerary architecture and more.

Sir John Soane was a great architect and enjoyed playing with buildings and their interiors. He rebuilt his own home (now the John Soane Museum) to demonstrate various building and design techniques, including a basement crypt intended to have an atmosphere reminiscent of Roman catacombs.

A special chamber was designed to house the sarcophagus of King Seti I, widely acknowledged as one of the most important Egyptian antiquities ever discovered, and bought by Soane after the British Museum had allegedly flinched at the £2,000 price. Sir John celebrated the arrival of the sarcophagus in 1824 with three evening parties, inviting more than 1,000 guests and hiring over 300 lamps to lend a suitable atmosphere. Artist and writer, Benjamin Robert Haydon, wrote:

‘…it was the finest fun imaginable to see the people come into the Library after wandering about below, amidst tombs and capitals, and shafts, and noseless heads, with a sort of expression of delighted relief at finding themselves among the living, and with coffee and cake. Fancy delicate ladies of fashion dipping their pretty heads into an old mouldy, fusty hierogliphicked coffin, blessing their stars at its age, wondering whom it contained…’ Soane believed that ‘magnificent buildings in honour of the dead inspire the soul’, an idea he had already explored whilst designing the Gallery and Mausoleum at Dulwich in 1811-14. He asked the visitors to the new building to:

“Fancy the Gallery brilliantly lighted for an unrivalled assemblage of pictorial art, – whilst a dull, religious light shews the mausoleum in the full pride of funeral grandeur, displaying its sarcophagi, enriched with the mortal remains of departed worth, and calling back so powerfully the recollections of past times, that we almost believe we are conversing with our departed friends now sleeping in their silent tombs.”

He was also interested in the growing taste for Gothic architecture, designing a Monk’s Parlour and Yard within his home and imagining an entire life for the Monk whose body he claimed lay entombed there. Soane’s design was intended to show how Gothic style could stimulate a sensation of melancholy by clever use of light and space.

Both in lighting and design Sir John’s ideas remain entwined with memorial architecture today, though melancholy and funereal grandeur were to reach an apotheosis in the Victorian era following his death.